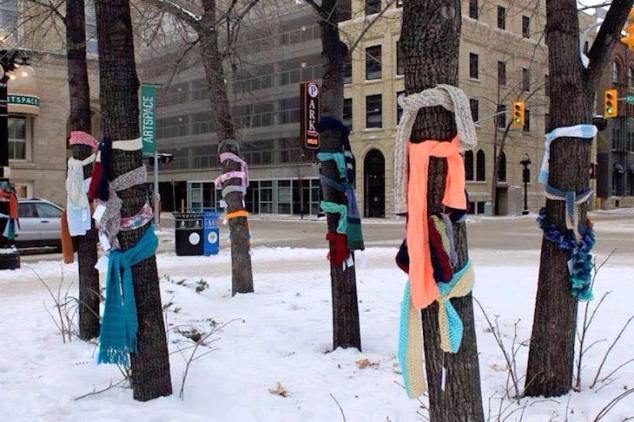 No, it’s not a yellow ribbon, it’s probably not even yellow. Neither is it another form of yarn bombing, which is sort of wasteful when you think about it. Rather, there’s a new trend spreading across the country. People are tying scarves, handmade or store bought, around trees is urban areas, parks, and neighborhoods. They’re labelled with messages like, “No, I’m not lost. Please take me with you if you’re cold. Hope it helps.” Since the trend started in Seymour,Indiana, church groups, schools fundraisers and kind random strangers from almost every state are pitching in to make sure a good portion of the 1.56 million homeless Americans are a little warmer this winter! A bit of good news in this most difficult of months following the elections. A fuller version of this heartwarming little story can be found on Facebook or at HeartlandEternal.com.

Going down right now to my stash of handknits to find a couple to share.

This pattern caught my eye immediately when it was posted. It’s by Lion Brand, and though they’re calling it a poncho, it actually has cuffs, so it seems to be one of the new sweater-shawl  designs that have been cropping up lately. I ordered the yarn, LB’s Amazing, which is a single strand, wool acrylic blend, in the Strawberry Field

colorway. The set up is a bit tricky, because the increases depend on moving markers every row, but after a few false starts, I got it right and it’s now working up quickly, on a size J-10 (6 mm) hook. Free pattern can be found here.

Having naturally curly hair,  alternately the bane and joy of my existence, the title of this stylish bag caught my eye. It’s a free crochet pattern from Italian designer Nicoletta Tronci, featuring lots of single crochet to make the fabric sturdy, and some whimsical topstitching to fancy it up. It would probably look great in any color, but I really like the purple.

Striking in its simplicity, this crocheted tunic caught my eye in the Lion Brand Newsletter this evening. Done up in Homespun using a size 10.5 (US) hook, it’s calling out to me to use the blue Homespun that started out as a throw and never made it home. This looks like something I’ll wear a lot.

Posted a couple of year back on the Lion Brand Yarn website, this one’s a keeper:  a hat that will keep it’s shape even after many washings. The one in the photo was made with worsted weight wool and a size G-6 hook.
You can find the pattern here.

This is a fairly complicated pattern, but the results are worth the patience and effort. If you run into problems, see the comments below, which contain suggestions.

I’ve come to dislike those women’s novels that revolve around the characters’ involvement in a knitting circle or quilting group or the like. They tend to be a bit too emotional for my taste, long on sentiment and romance and short on good writing. Recently, however, I completed several historical novels in which knitting or another of the fiber arts played key roles in moving the plots along. I generally post my book reviews on my other blog, You’re History, but I’ve decided to publish the special fiber arts novels here.

The first title is Burning Bright, by Tracy Chevalier, which I reviewed here.

In this story, women living in late 18th century London are adding to their incomes by

making buttons out of metal rings, which they wrap with thread in intricate designs and colors. This was a genuine cottage industry for about 100 years, and the buttons were known as Dorset buttons because the practice originated in that shire. In Burning Bright, the buttons serve as the vehicle through which two women and their families become intertwined with each other. I recently wrote a short article about Dorset buttons and posted it here.

Another fascinating novel in which knitting, crochet, and sewing are central to the story is Solstice Wood, by Patricia A. McKillip. This  is the sequel to Winter Rose, a love story about a human woman who fell in love with a “fay” man. Solstice Wood is set in the same American town, and the same house, but in modern times. Sylvia Lynn comes from a family that has lived in Lynn Hall for generations. Several years back, she left home rather abruptly, moving across the country, but now she must return for the funeral of her beloved grandfather. Sylvia is stunned to learn that Lynn Hall is now hers, according to her grandfather’s will. She plans to stay only a few days, and on her last evening, attends the Fiber Guild, a women’s club that has met at Lynn Hall for a century. It becomes more and more clear that something peculiar is going on, for the guild members seem unusually intent upon their designs and stitches.

I won’t set down any spoilers about what happens to Syl and her family. This is a terrific story, part reality, part fantasy, with more than a touch of magic. It incorporates many classic folkloric motifs and themes, but the one that most interested me is the needlework connection. In mythology and folklore, spinning, sewing, and threads play an important role. In story of the labyrinth and the Minotaur, for example, a thread is laid so the hero can find his way back out. The 3 Fates, spinning, weaving, and finally cutting the thread, represent the cycle of life. Fairy tale heroines prick their fingers on needles or spindles, or are forced into a life of endless spinning.

In Solstice Wood, the Fiber Guild’s creations are designed to protect one world from another, using age old methods known to wise women everywhere. Today all us fiber artists recognize and appreciate the stress relieving properties of needlework. By reading such books as Solstice Wood, and by studying the magical properties of women’s work and women’s powers in folklore, I’ve come to appreciate the fiber arts in another way.

Another favorite is A Curse Dark as Gold, by Elizabeth C. Bunce. Categorized as a novel for young adults, this first novel goes beyond age limits. A retelling of the Rumpelstiltskin fairy tale, it brings rich characters, modern themes, and a touch of magic and romance to the process of spinning wool and dyeing cloth. Not to be missed. You can find my review here.

In  August, I read The Wishing Thread, by Lisa Van Allen, and am just getting around to listing it here. This is set in Sleepy Hollow, NY, a town that sets the stage for all things eerie. The novel’s about a family that has run a knitting shop for generations, where not only great yarns and patterns are sold, but also offers a service knitting magical spells into garments as a bonus. Now the shop is threatened by redevelopment, and the family gathers to determine what to do, if anything, to save the business. Reviewed here .

I just found out that the amazing Erin  from kniterly nominated me for a Versatile Blogger award. The best recognition is the kind you get from your peers. Plus it’s nice to know that there are people enjoying what you’re writing 🙂
So this is what I have to do:
If you have been nominated, nominate 15 fellow bloggers that you love and who are relatively (fair warning, I am taking “relatively” and running with it) new to blogging. Let them know that you have nominated them. Share 7 random facts about yourself. Thank the blogger who has nominated you. Then add the Versatile Blogger Award picture to your post.
Because I follow only nine blogs, I’m nominating nine rather than fifteen.
Here are 7 random facts about me… I am going to attempt to make them non-knitting/cat/library related. This is going to be HARD
1. I have lived in Connecticut most, but not all, of my life..
2. I love to travel, especially to England, Italy, and France, but it’s getting so expensive.
3. I have naturally curly hair that I have only recently come to appreciate.
4. I am a psychologist.
5. History is my avocation, something that travel stimulates.
6. I love cats, dogs, goats and animals in general.
7.I’m most proud of my long marriage, my two kids, and my two grandchildren.
The blogs I would like to nominate are:
kniterly
Christopher Pagliuco
Coconut Concussion
Historic Buildings of Connecticut
Under a Blood Red Sky
Too Many Books, Too Little Time
Yarnerina’s
freaky folk tales
Under a Blood Red Sky
These are great blogs, always interesting, timely, and, well, versatile. Check them out and add some quality to your RSS.

Continued in this way to inc 14 sts every rnd, having 1 st more between incs each rnd until there are 8 (9,10)sts between incs.
Work 3 rnds even.

Continue in this way to dec 14 sts every rnd, having 1 st less between decs each rnd until there are 6 sts between decs.
Headband: Work 6 rnds of one sc in each st. Join and fasten off.

Three  to knit an

d one to crochet: